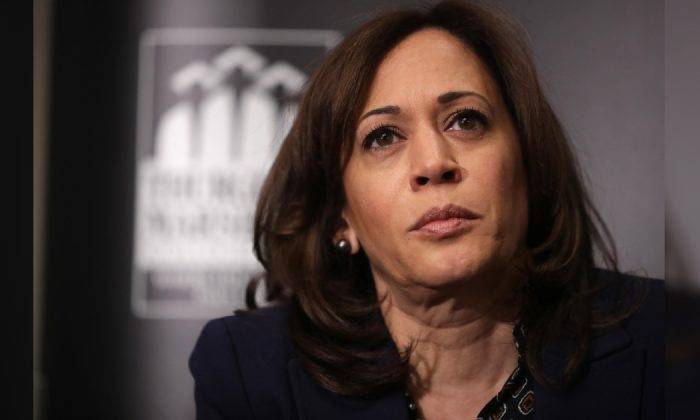 Sen. Kamala Harris (D-Calif.) is laying off staff at her Baltimore headquarters and redeploying others to Iowa, restructuring her dwindling 2020 campaign, according to reports.

According to a campaign memo obtained by Politico, Harris plans to focus more on a make-or-break effort in the first nominating contest in Iowa. She will redeploy field staff to Iowa from California, New Hampshire, and Nevada as she goes “all-in.”

Harris’s plans to go “all-in on Iowa” comes after the Democratic presidential candidate slipped in opinion polls over the last three months, now lagging behind top rivals in fundraising. She has previously been criticized for her relative absence from the first-in-the-nation caucus state, and has made efforts to visit Iowa multiple times this month, The Hill reported.

Liquid error: product form must be given a product
SHOP THE FULL 2020 CAMPAIGN COLLECTION

As well as trimming staff, the U.S. senator from California plans to slash the salaries of her campaign’s consultants and campaign manager, Juan Rodriguez, and renegotiate contracts, according to the memo. Rodriguez’s salary was just over $10,000 a month in the third quarter, Politico reported.

In the memo, Rodriguez wrote that the decisions are “difficult” but “strategic,” and will ensure Harris’s campaign is “positioned to execute a robust Iowa ground game” and “a minimum 7-figure paid media campaign in the weeks leading up to the caucus.”

Harris has been losing support since mid-summer, falling into the middle of the crowded pack of candidates seeking the Democratic nomination to challenge President Donald Trump in the November 2020 election.

Rodriguez added that the scheduled moves would bring Harris one step closer to her goal amid intense competition.

“From the beginning of this campaign, Kamala Harris and this team set out with one goal—to win the nomination and defeat Donald Trump 2020,” he wrote. “This requires us to make difficult strategic decisions and make clear priorities, not threaten to drop out or deploy gimmicks.”

“Plenty of winning primary campaigns, like John Kerry’s in 2004 and John McCains’ in 2008, have had to make tough choices on their way to the nomination, and this is no different,” Rodriguez added.

The campaign’s presence in South Carolina, which hosts the fourth nominating contest and which Harris has made central to her strategy, will not be affected, the memo said.

“In a field of 18 candidates, we face an incredibly competitive resource environment,” he wrote. “To effectively compete with the top campaigns and make the necessary investments in the critical final 100 days to the caucus, we need to reduce expenditures elsewhere and realign resources.”

Rodriguez noted in the memo that Harris finished the last quarter with the fourth most cash on hand, ahead of some candidates who lead her in opinion polls.